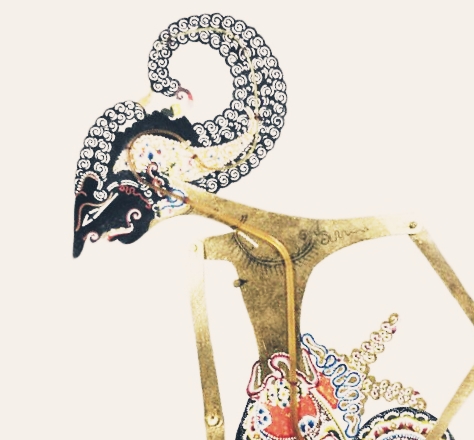 Fossilised remains of Homo erectus, popularly known as the “Java Man”, dating back 1.7 million years were found along the banks of the Bengawan Solo River.
The island’s exceptional fertility and rainfall allowed the development of wet-field rice cultivation, which required sophisticated levels of cooperation between villages. Out of these village alliances, small kingdoms developed. The chain of volcanic mountains and associated highlands running the length of Java kept its interior regions and peoples separate and relatively isolated. Before the advent of Islamic states and European colonialism, the rivers provided the main means of communication, although Java’s many rivers are mostly short. Only the Brantas and Sala rivers could provide long-distance communication, and this way their valleys supported the centres of major kingdoms. A system of roads, permanent bridges and toll gates is thought to have been established in Java by at least the mid-17th century. Local powers could disrupt the routes as could the wet season and road use was highly dependent on constant maintenance. Subsequently, communication between Java’s population was difficult.

The 9th century Borobudur Buddhist stupa in Central Java
The Taruma and Sunda kingdoms of western Java appeared in the 4th and 7th centuries respectively, while the Kalingga Kingdom sent embassies to China starting in 640. However, the first major principality was the Medang Kingdom that was founded in central Java at the beginning of the 8th century. Medang’s religion centred on the Hindu god Shiva, and the kingdom produced some of Java’s earliest Hindu temples on the Dieng Plateau. Around the 8th century the Sailendra dynasty rose in Kedu Plain and become the patron of MahayanaBuddhism. This ancient kingdom built monuments such as the 9th century Borobudur and Prambanan in central Java.
Around the 10th century the centre of power shifted from central to eastern Java. The eastern Javanese kingdoms of Kediri, Singhasari and Majapahit were mainly dependent on rice agriculture, yet also pursued trade within the Indonesian archipelago, and with China and India.
Majapahit was established by Wijaya and by the end of the reign of Hayam Wuruk (r. 1350–89) it claimed sovereignty over the entire Indonesian archipelago, although control was likely limited to Java, Bali and Madura. Hayam Wuruk’s prime minister, Gajah Mada, led many of the kingdom’s territorial conquests. Previous Javanese kingdoms had their power based in agriculture, however, Majapahit took control of ports and shipping lanes and became Java’s first commercial empire. With the death of Hayam Wuruk and the coming of Islam to Indonesia, Majapahit went into decline.

Spread of Islam and rise of Islamic sultanates

Tea plantation in Java during Dutch colonial period, in or before 1926
Java’s contact with the European colonial powers began in 1522 with a treaty between the Sunda kingdom and the Portuguese in Malacca. After its failure the Portuguese presence was confined to Malacca, and to the eastern islands. In 1596, a four-ship expedition led by Cornelis de Houtman was the first Dutch contact with Indonesia. By the end of the 18th century the Dutch had extended their influence over the sultanates of the interior through the Dutch East India Company in Indonesia. Internal conflict prevented the Javanese from forming effective alliances against the Dutch. Remnants of the Mataram survived as the Surakarta (Solo) and Yogyakarta principalities. Javanese kings claimed to rule with divine authority and the Dutch helped them to preserve remnants of a Javanese aristocracy by confirming them as regents or district officials within the colonial administration.
Java’s major role during the early part of the colonial period was as a producer of rice. In spice producing islands like Banda, rice was regularly imported from Java, to supply the deficiency in means of subsistence.
During the Napoleonic wars in Europe, the Netherlands fell to France, as did its colony in the East Indies. During the short-lived Daendelsadministration, as French proxy rule on Java, the construction of the Java Great Post Road was commenced in 1808. The road, spanning from Anyerin Western Java to Panarukan in East Java, served as a military supply route and was used in defending Java from British invasion.
In 1811, Java was captured by the British, becoming a possession of the British Empire, and Sir Stamford Raffles was appointed as the island’s Governor. In 1814, Java was returned to the Dutch under the terms of the Treaty of Paris.

Japanese prepare to discuss surrender terms with British-allied forces in Java 1945
In 1815, there may have been five million people in Java. In the second half of the 18th century, population spurts began in districts along the north-central coast of Java, and in the 19th century population grew rapidly across the island. Factors for the great population growth include the impact of Dutch colonial rule including the imposed end to civil war in Java, the increase in the area under rice cultivation, and the introduction of food plants such as casava and maize that could sustain populations that could not afford rice. Others attribute the growth to the taxation burdens and increased expansion of employment under the Cultivation System to which couples responded by having more children in the hope of increasing their families’ ability to pay tax and buy goods. Cholera claimed 100,000 lives in Java in 1820.
The advent of trucks and railways where there had previously only been buffalo and carts, telegraph systems, and more coordinated distribution systems under the colonial government all contributed to famine elimination in Java, and in turn, population growth. There were no significant famines in Java from the 1840s through to the Japanese occupationin the 1940s. However, other sources claimed the Dutch’s Cultivation system is linked to famines and epidemics in the 1840s, firstly in Cirebon and then Central Java, as cash crops such as indigo and sugar had to be grown instead of rice. Furthermore, the age of first marriage dropped during the 19th century thus increasing a woman’s child bearing years.